Head of the School of Arts and Professor of American Studies 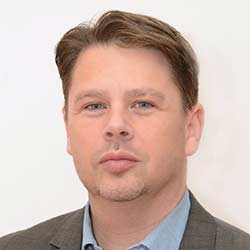 Professor Halliwell’s expertise will be invaluable in helping to understand the factors that have contributed to the United States becoming the global epicentre of the COVID-19 outbreak. He has published extensively on public health in the U.S and he is currently involved in a collaborative ESRC-funded Global Challenges project on public health and the prison system in Guyana. His new book titled American Health Crisis: One Hundred Years of Panic, Planning, and Politics will be published in spring 2021 by the University of California Press and explores U.S. federal responses to critical health episodes from the end of World War I to the present. He charts the evolution of the U.S. Public Health Service in response to warfare, pandemic and periodic crises in health care delivery. He also covers the current COVID-19 pandemic with respect to federal leadership, health security, public health education, and media and cultural responses. To learn more about Professor Halliwell’s book, read his blog: Breaking the cycle of health crises.

My research interests span American cultural and intellectual history, the health humanities and disability studies, twentieth-century and contemporary American fiction, American film after 1945, the history of popular music, critical theory, psychoanalysis and the history of psychology, urban cultures, the avant-garde, and cultures of protest.

Beyond and Before: Progressive Rock Since the 1960s (New York: Bloomsbury, 2011) [co-authored with Paul Hegarty]

Images of Idiocy: The Idiot Figure in Modern Fiction and Film (Brookfield, VT: Ashgate, February 2004; reissued by Routledge in 2016).

I am keen to supervise projects at PhD and MA level that fall within the following areas:

I teach across the range of American literature from the Revolutionary period to contemporary America, with a special interest in early twentieth-century literature, post-World War II American fiction, film and visual culture, critical theory and popular music.