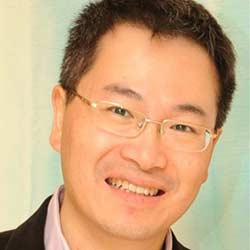 Consultant Virologist and Honorary Associate Professor, Dr Tang, researches respiratory viruses – how they cause disease, how they spread and how they can be controlled – particularly focusing on aerosol and airborne transmission. He has developed international collaborative networks with other virologists, physicians, epidemiologists and engineers over the last 20 years to further this work.

After training in Medicine and Zoology at Cambridge, and completing a Zoology PhD in biological fluid dynamics in Aberdeen, Dr Tang finished his medical training in Sheffield before completing specialist clinical virology training at University College London in 2005.

Dr Tang’s experience with respiratory virsuses began with a move to Hong Kong after the SARS 2003 outbreaks, as an Assistant Professor, developing a clinical and research interest in respiratory viruses, particularly on influenza and its transmission.

He then moved to Singapore in 2008 as a Consultant/Virologist, arriving there just in time for the 2009 A/H1N1 influenza pandemic. There he built a 1m diameter schlieren imaging system to visualise human exhaled airflows such as breathing, talking, coughing, sneezing, singing – to aid aerosol infection control guidance.

Dr Tang’s next move saw him spend a couple of years working in Edmonton, Canada - where he was involved in describing the first imported, fatal human case of avian A/H5N1 influenza into North America in 2013.

Upon returning to the UK in 2014, Dr Tang settled in Leicester where he has been running the diagnostic virology laboratory and advising on the clinical management and infection control of viral infections, particularly respiratory viruses, like influenza and SARS-CoV-2 that is causing the current COVID-19 pandemic.