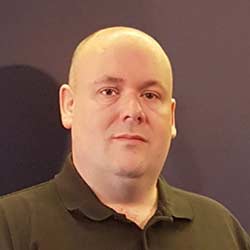 School of Physics and Astronomy
jmch1@le.ac.uk

Based in the School of Physics and Astronomy, John Holt is a scientist and engineer working in the field of Mars Sample Return, developing high containment technology to safely handle Mars rocks and atmospheric samples once they are brought back to Earth, which may be as early as 2031.

A major challenge in Mars Sample Return is designing the right technology to safely move, analyse and curate the precious samples without the risk of contamination. Funded by the European Space Agency, the containment solution at Leicester is the Double Walled Isolator (DWI), which has been designed to protect the samples from terrestrial contamination and to isolate the samples from Earth’s environment. Scientifically selected samples will be brought back to Earth, rather than analysed on the surface of Mars, so that a team of international expert scientists can analyse them using state of the art instruments, which are too big and complex to take to the planet. As further explorations of Mars are planned by NASA and ESA Mars Sample Return is going to be one of the biggest scientific undertakings of the 21st century and technologies such as the DWI could provide a key contribution to the mission.

Mars is not John’s only interest; with his expertise in space instrumentation, he has also worked with astronauts and planetary scientists to help understand the challenges of sending the next generation of humans to the Moon. In 2017 John was involved in field testing a mechanical rock hammer known as the Small Planetary Linear Impulse Tool, which was developed at Leicester with funding from the UK Space Agency. As part of the project, John provided instrument familiarisation training to Dr Matthias Maurer, one of the astronauts at the European Astronaut Centre, during the Pangaea-X field test campaign.