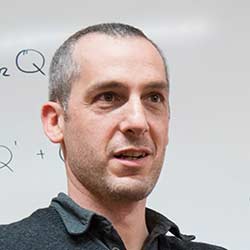 Dr Adriani’s research focuses on a game theoretic approach to social norms, modelling the interactions between people under a set of specified rules. Dr Adriani uses game theory to explore how and why certain norms can be sustained and the conditions that can lead to different norms emerging or disappearing.

Dr Adriani’s research shows the difference that intervention has on an individual’s efforts at social distancing and the effect of the speed of the intervention, the structure of people’s social networks and the prevailing social norms.

My research is highly eclectic and interdisciplinary in nature, spanning from the Economics of Social Norms and Cultural Transmission, to more traditional themes in Economics and Finance, like the role of financial intermediaries or price competition with asymmetric information.

The common denominator in all my projects is the adoption of insights from Game Theory and, in particular, Information Economics.

I believe that information transmission is one of the most powerful forces shaping institutions and behaviour, and my research tries to shed light on its role.

Optimal Similarity Judgements in Intertemporal Choice (and beyond), with S. Sonderegger forthcoming, Journal of Economic Theory.

Teaching by Example and Induced Beliefs in a Model of Cultural Transmission, with J. Matheson and S. Sonderegger. Journal of Economic Behavior and Organization, 2018, 145, 511-529.

How do Financial Intermediaries Create Value in Security Issu-es?, with L. Deidda and S. Sonderegger. Review of Finance, 2014, 1915-1951.

“Competition and the Signaling Role of Prices” with L. Deidda. International Journal of Industrial Organization, 2011, 29, 412-425.

“Why do Parents Socialize their Children to Behave Pro-Socially? An Information-Based Theory”, with S. Sonderegger. Journal of Public Economics, 2009, 93, 1119-1124.