Samuel Pepys, the Restoration diarist who meticulously documented his life in 1660s London, also documented himself in other ways – through portraits. New research from the University of Leicester has identified the painter who first fuelled Pepys’s enthusiasm for commissioning pictures.

Pepys had his portrait painted many times across his career, with his pictures now held in national collections. The man who got him started on this portrait habit has not previously been identified, although there were guesses about who it might be. Pepys refers to him in his diary only as ‘Mr Savill’.

Through archival research, published in the Journal of the Warburg and Courtauld Institutes, Associate Professor Dr Kate Loveman from the University of Leicester’s School of Arts has established that the artist was a previously unrecognised painter, Daniel Savile. 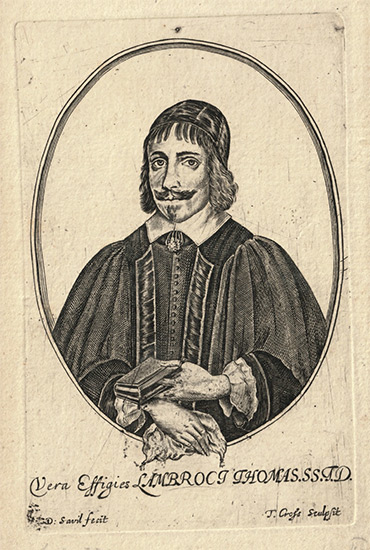 Savile is not well known because he painted men and women from the ‘middling sort’. These were people who, like Pepys at the start of his career, could not afford the services of one of the famous portrait painters. Savile’s clientele included clergymen such as Lambrock Thomas, who became chancellor of Chichester Cathedral in 1660 – his picture is one of a couple of images by Savile that survive as engravings (see image).

None of Savile’s original images appears to have survived (including the one of Pepys) but he had a long and successful career – partly due to his willingness to humour clients by, for example, painting Mrs Pepys’s dog.

Dr Loveman said: "We don’t know a great deal about how men and women went about arranging for portraits of themselves in the late 17th century if they were neither art experts nor extremely wealthy. The new details about Savile’s studio help understand more about the everyday business of portrait painting and the pleasures and risks for novice customers."

At a time when professional female portrait painters were very rare, Savile turns out to have been responsible for employing many young women in his business. Dr Loveman added: "I was particularly interested to find that Savile specialised in apprenticing girls: seven out of eight of his apprentices were young women. Trying to find out more out about Pepys’s painter therefore unexpectedly led to my discovering more about the possibilities for women seeking training and work in late 17th-century London."

Dr Loveman’s research on Pepys also features in a new edited selection of his Diary for Everyman.

Leicester experts to feature at national Festival of Social Science