The long-lived international Cassini mission has revealed a surprising feature emerging at Saturn’s northern pole as it nears summertime, thanks to a Leicester astronomer: a warming, high-altitude vortex with a hexagonal shape, akin to the famous hexagon seen deeper down in Saturn’s clouds. This suggests that the lower-altitude hexagon may influence what happens up above, and that it could be a towering structure spanning hundreds of kilometres in height.

A new long-term study has now spotted the first glimpses of a northern polar vortex forming high in the atmosphere as Saturn’s northern hemisphere approached summertime. This warm vortex sits hundreds of kilometres above the clouds, in a layer of atmosphere known as the stratosphere, and reveals an unexpected surprise. 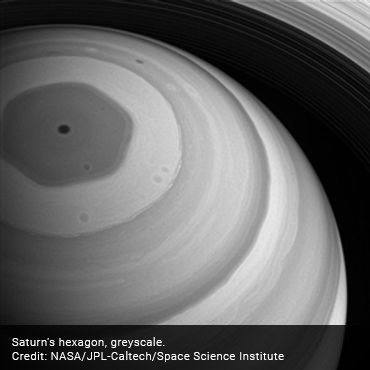 Dr Leigh Fletcher from our Department of Physics and Astronomy led the study. He said: “While we did expect to see a vortex of some kind at Saturn’s north pole as it grew warmer, its shape is really surprising. Either a hexagon has spawned spontaneously and identically at two different altitudes, one lower in the clouds and one high in the stratosphere, or the hexagon is in fact a towering structure spanning a vertical range of several hundred kilometres.”

Saturn’s cloud levels host the majority of the planet’s weather, including the pre-existing north polar hexagon. This feature was discovered by NASA's Voyager spacecraft in the 1980s and has been studied for decades; it is a long-lasting wave potentially tied to Saturn’s rotation, a type of phenomenon also seen on Earth in structures such as the Polar Jet Stream.

Understanding how and why Saturn’s north polar vortex has assumed a hexagonal shape will shed light on how phenomena deeper down in an atmosphere can influence the environment high up above, something that is of particular interest to scientists trying to figure out how energy is transported around in planetary atmospheres.

The Cassini mission came to an end in September 2017.

Lord Willetts appointed chair of the UK Space Agency’s Board