Headlines have been filled with revelations from the Labour and Conservative party conferences these past two weeks, but behind the scenes it was the politicians making the discoveries as Space Park Leicester touched down in their Liverpool and Birmingham venues.

Space Park Leicester joined Midlands Engine and Midlands Connect at both conferences, showcasing the business opportunities that the region has to offer.

Staff from the University were on hand to chat with fascinated visitors, including several ministers, about Space at the University and the opportunities provided by Space Park Leicester.

The future direction of the UK space sector, the benefits of a ‘Low Cost Access to Space’ (LOCAS) satellite Facility and Space Park Leicester’s capability to deliver against national, regional and local strategies for economic growth were the key messages our staff were sending to politicians, policymakers and influencers.

The Labour Party Conference took place from 23 - 25 September at ACC Liverpool, where the Space Park Leicester stand caught the attention of both John McDonnell MP and John Ashworth MP. 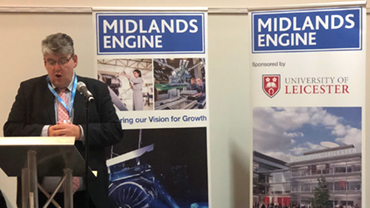 Professor Paul Monks (pictured), Head of the College of Science and Engineering, was invited to speak at the Midlands Engine fringe event on 24 September alongside Sir John Peace, Chair of Midlands Engine. BBC East Midlands were on hand to report how Midlands Engine and Space Park Leicester are set to bring investment into the region, and you can watch the interview with Professor Monks and Sir John Peace online. 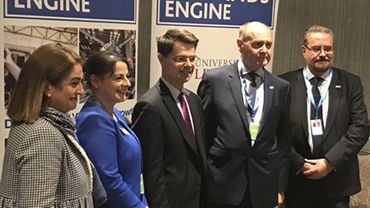 Grant Bourhill said: “It was fantastic to see the University, working in partnership with Midlands Engine, engaging with a range of senior politicians.  One specific highlight was Greg Clark MP, Secretary of State for Business, Energy and Industrial Strategy, speaking of the importance of robotics and space manufacture to the UK economy, something we are keen to see delivered at Space Park Leicester.”

The presence of Space Park Leicester coincided with the submission of the planning application for Phase 1 of the exciting new development, announced by the University this week.

Most distant detection of a black hole swallowing a star