On Sunday 11 November 2018, hundreds of students, staff, alumni and members of the community joined Sir David Attenborough and his nephew Michael Attenborough on campus to pay their respects to those from Leicester, Leicestershire and Rutland who made sacrifices during the Great War and start the formal celebrations of the centenary of our University.

As well as commemorating 100 years since the end of the First World War, the day also marked 100 years since prominent local physician Dr Astley Clarke founded the ‘Leicester University Fund’ in celebration of peace. Dr Clarke made the first contribution of one hundred pounds. 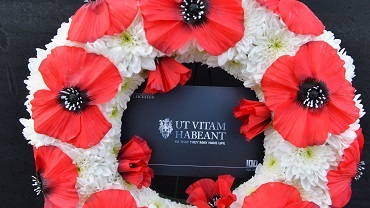 In his opening address, President and Vice-Chancellor, Professor Paul Boyle CBE said: “Leicester is a remarkable place because it is the only city in the world to create a university as a living memorial to the First World War thanks to donations, large and small, made by the local community.

“It is a legacy we do not take lightly and I am immensely proud of this connection.  This university was created by, and belongs to, the people of Leicester, Leicestershire and Rutland.”

The President and Vice-Chancellor also revealed during the event that the University has been recognised as a University of Sanctuary  – one of only eight in the country and the only one in the region.

The Attenborough family has a long association with the University, with Sir David’s father, Frederick Attenborough, appointed as Principal of the University College 1932-1951. His sons – Richard, David and John grew up on campus. 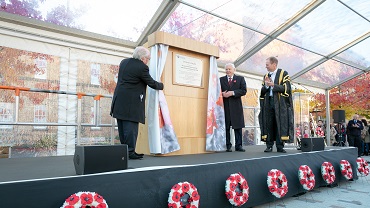 In his speech, Sir David said: “It is a proud boast that I have that I was reared on this campus. It is a wonderful University. I feel it in my blood, and I am truly privileged to be here at this epoch making event launching yet a new enterprise of generosity for new citizens of this city.

“This University has a wonderful reputation for humanity, for culture, for generosity as do the citizens of this ancient noble city. I believe it will continue because you have now become a University of Sanctuary offering scholarships to people who come here for many reasons to seek safety, sanctuary and learning. And you, the citizens of this city, will be supporting them and I hope will continue to support them.”

Dr Clarke’s great-great-great niece, Lily McCurdy, who graduated with a PGCE from the University this summer read a letter her ancestor wrote to the Leicester Daily Post in 1917, calling for the creation of a University College as a fitting war memorial. Lily also appears in our new centenary film which was shown in cinema's across  Leicester and Leicestershire over Armistice weekend.

City Mayor and University graduate, Sir Peter Soulsby also took to the stage during the event. He said: “When we look back, we do so from a position where we are very proud of our University. It has a richly deserved national and international reputation for its teaching and its research and that is something that is of great pride not just for the University, but the city and counties that gave it birth. 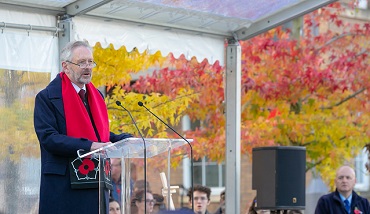 Alumni to walk 100 miles for ex-SU officer with MS