Networks of knowledge then and now: digital potential

The second of three workshops organised by the Insular Manuscripts Network took place in Dublin and Galway on 19-22 June 2018.

Read a summary of the event on the British Library blog.

09:30–11:30 Manuscripts in the Library of Trinity College Dublin 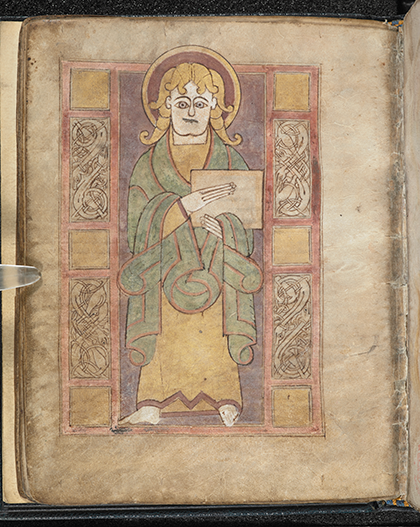 In 2014 The Department of Preservation and Conservation and Department of History of Art and Architecture at Trinity College were awarded funding by the Bank of America Merrill Lynch art conservation project. Funding was for the conservation, digitisation and research into four Insular Gospel books; Codex Usserianus Primus (TCD MS 55), Book of Dimma (TCD MS 59), Book of Mulling (TCD MS 60) and the Garland of Howth (TCD MS 56). The principal conservation work required was the remounting of folios from Codex Usserianus Primus and rebinding of the Book of Dimma. Pigment analysis was also carried out on the manuscripts. All four manuscripts were digitised and published online, hosted on the Trinity digital collections website (see below).

In order to maximise the visibility of the project a project blog was established and short slide sequences relating different aspects of the project were displayed on screens at the entrance to the College campus. Towards end of project an online exhibition giving brief overview of project with links to videos on each manuscript, was created, with a link from the TCD Library homepage. Two publications, one with academic findings, one directed towards a popular audience were also produced.

The momentum gained by the project has led to the continued digitisation of the Insular manuscripts in the TCD collections, which is now almost complete. One of the key challenges remains directing as wide an audience as possible to the digital material. One strategy for this is the launch in October 2018 of a MOOC dealing with the Book of Kells, which will place the wider collection of surviving Insular manuscripts in the context of this more famous work.

The e-Codices project started in 2005, as collaboration between the Abbey Library of St Gall and the University of Fribourg, and included in the following years all the main libraries of Switzerland. The goal of the project is to provide free access to all medieval and to some selected early modern manuscripts of Switzerland via a virtual library. In June 2018, the site hosts 2048 items form 84 different libraries or collections.

On the website, e-codices offers complete digital reproductions of the manuscripts, made in the two digitization centres, in St Gall and in Cologne. Each digitized manuscript receives a short description translated into the four languages of the e-codices website (German, French, Italian and English). These minimal metadata are completed with scholarly manuscript descriptions, which can be more than one (standard and additional descriptions), converted into XML format compatible with the TEI-P5 standard. The metadata generated are interoperable with other digitalisation projects, meta-search engines and other portals, which guarantee long-term availability. E-codices has already published online more than 40 Insular items (cf. list below). Some of them were published for the first time with a new scientific description thanks to a sub-project “Codices Fuldenses Helvetiae”.

Beside e-Codices, a second project, Fragmentarium, a digital library specialized for medieval fragment research and a web application has been developed since 2015 in Fribourg. Its main aim is to build an environment to upload, describe, transcribe and assemble medieval fragments online. Like e-codices, Fragmentarium consists of images with metadata and provides an IIIF-manifest for every document. To date, three Insular fragments are online – one from Basel University Library and two from Leipzig University Library which can be found here and here.

A list of Insular Manuscripts on e-codices with links can be found below under 'resources'.

The British Library is using multispectral imaging to recover erased passages, obscured corrections, faded annotations, hidden inscriptions, indecipherable glosses, under-text and underdrawings across a vast array of collection items. The remarkable results are enabling new and ground-breaking scholarship on material once thought fully-understood. Some collections have even been re-dated through the discovery of intricate details in illuminations which have lost clarity over the centuries.

The British Library uses a Megavision Cultural Heritage EV Imaging System with a monochrome E7 50-megapixel back. Iron gall ink is found in many insular manuscripts and responds best under LED illumination in the near-ultra-violet (365 nm).

Narrow-band LED illumination subjects the manuscripts to only the required light energy to expose the sensitive unfiltered monochrome sensor. Images are captured over fourteen spectral bands from the near ultra-violet (UV, 365 nm) to the near infra-red (IR, 1050 nm). Data captured can be processed using statistical methods such as Principal Component Analysis to further extract and enhance areas of illegibility. The technology has been used on some of the Library’s most significant Treasures and has enabled discovery of a fugitive figure on a folio of Leonardo da Vinci’s notebook, as well as recovering text on a burnt copy of Magna Carta.

Fire-damage causing illegibility of text has proven to be a significant challenge to scholars of the famous collection of manuscripts assembled by Sir Robert Cotton held at the British Library. On 23 October 1731, a fire broke out where the collection was being stored at Ashburnham House, Westminster, destroying and damaging many of the manuscripts. A conservation effort in the 18th and 19th centuries oversaw gathering of what remained of these precious manuscripts and loose fragments were bound into volumes. Many of these volumes contain unique texts or their earliest known copies.

In 2017, the British Library conducted a Fragmentarium case study to explore the possibilities for improving access to burnt fragments of Anglo-Saxon manuscripts from the Cotton Collection. One of the worst affected collection of manuscripts were those in the Cotton Otho press. Early catalogues show that in the 17th century the manuscript contained four distinct texts written some time during the second half of the 8th century.

Multispectral imaging of Cotton MS. Otho A. I and subsequent processing of the data has revealed far more details from the surviving fragments than are otherwise visible. This work has improved comparison studies to other portions of the manuscript held at Bodleian Library, Oxford, and helped to preserve the present state of these vulnerable fragments, which are often too fragile to be issued in the reading room. 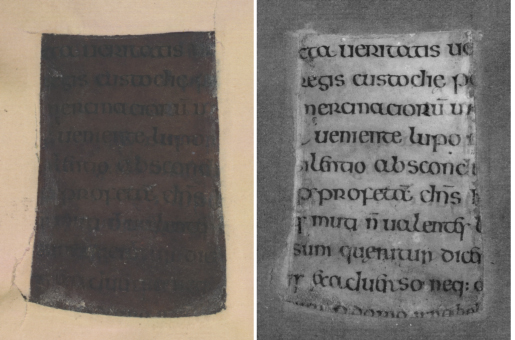 Left: A fragment of Cotton MS Otho A. I (folio 1v) as seen under normal visible light showing severe darkening and illegibility due to fire damage. Right: The fragment as processed following multispectral imaging.


Results from multispectral imaging can reveal the primitive version of texts by seeing through corrections and providing scholars with a greater understanding of the thought-process of their authors. High-resolution images enable better comparison of scribal hands and give a clear indication of where ink is changed or replenished.

Conversations between scholars and scientists will help to improve the impact of this developing technique to the study of insular manuscripts by targeting specific challenges unique to this research area. Through collaboration we can look forward to some exciting revelations that are currently hiding in our collections, patiently awaiting discovery.