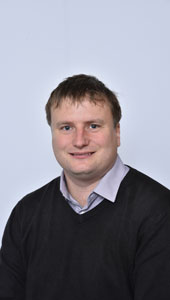 Richard received his MCHEM degree (2003-2007) and his DPhil in organic chemistry (2007-2012) at the University of Oxford. His DPhil work focused on mechanistic studies on human histone demethylases, under the supervision of Professor Christopher Schofield FRS. He then undertook postdoctoral work (2011-2013) in the Schofield group in collaboration with Doctor Akane Kawamura and the Structural Genomics Consortium, Oxford. In 2013, Richard was elected to the William R. Miller Junior Research Fellowship in Molecular Aspects of Biology at St. Edmund Hall, Oxford, where he initiated his research in formaldehyde biochemistry and biology. He has since continued this research at the University of Leicester, where he was appointed lecturer in chemical biology in 2017. Richard was awarded the Royal Society of Chemistry IBDG Young Investigator’s Award in 2018.