Our focus is improving outcomes for older people with frailty and urgent care needs, achieving global impact through local, national and international action, for example:

Our focus over the last ten years has been on trying to improve outcomes for older people with acute care needs (emergency departments, acute medical units and more recently specialised services). This aim was driven by clinical experience of seeing sub-optimal care, supplemented by increasingly detailed descriptions of the nature of the issue, for example, the Acute Medicine Outcome Study (AMOS) found that 76% of older people discharged form hospital within 72 hours of attendance had one or more adverse outcomes (e.g. reduced function, worsening cognition, reduced quality of life or death)(19). Throughout we have undertaken a parallel process of discovery and service development and testing – for example, the Acute Medicine Interface Geriatrician Study (AMIGOS) tested a geriatrician led transitional care model aimed at improving the outcomes described in AMOS, whilst at the same time, we developed and evaluated the Emergency Frailty Unit in Leicester. The combination of formal and real world evidence, accompanied by early dissemination and policy influence (e.g. multiple national and international presentations, policy documents such as the Silver Book), has led to Leicester becoming highly regarded for its innovation in the field of urgent care for older people. For example, we have hosted over 40 visits from national and international teams wanting to understand our care processes; a 2016 survey indicated that nearly half of English hospitals had been influenced by the ‘Leicester model’ and over 20% had implemented the model. Urgent care for frail older people now features prominently in policy documents such as NHS Improvement guidance on configuring urgent care(20). Our thinking in this area strongly influenced the building of the UK’s first ‘frail-friendly’ emergency department in Leicester, leading to the HBO design being updated based on our guidance.

Conroy and Banerjee lead the Acute Frailty Network (AFN), the largest improvement collaborative worldwide of its kind, focusing on the first 72 hours of urgent care for older people living with frailty. These people are among the most vulnerable of patients, and have higher rates of mortality, prolonged or recurrent hospital admissions, and institutionalisation to long term care. Through site visits, training and networking workshops, and dissemination of good practice, the AFN supports local hospital teams to deliver services for older people and has involved over 70 sites from England, Ireland and Wales to date.

A key recurring theme has been the need to focus on embedding geriatric competencies in the care pathway, rather than relying upon geriatricians as the sole mechanism to care for older people. We are addressing this through the ‘Hospital Wide Comprehensive Geriatric Assessment’ (HoW-CGA) study, but also through developing capacity and capability in all staff working in urgent care. In Leicester we have developed a large cadre of Advance Nurse Practitioners, and via the Acute Frailty Network, we support nurses and therapists working in urgent care through biannual national workshops. We regularly attract national and international external applicants for our one year ‘Geriatric Emergency Medicine’ fellowships, some of whom have gone on to develop frail friendly services of their own. We published European guidelines on geriatric competencies for emergency physicians (2016), and have devised a series of GEM ‘bootcamps’ across Europe to deliver against these (Leicester, Leiden, Stockholm, Helsinki in 2017-19), as well as annual presentations at the European Union Society of Emergency Medicine since 2013.

The HoW-CGA study has more formally examined the embedding of geriatric competencies and care pathways in non-geriatric settings, such as surgery and oncology. This consists of a four layered toolkit aimed at system leaders (influenced recent NHS Improvement guidance), operational management (including an automated risk stratification tool running off hospital records, and a CGA toolkit hosted by the British Geriatrics Society used by specialised services to improve their frailty offer)  (Specialised Clinical Frailty Network), and a patient level toolkit. Our robust links with national improvement networks, as well as the National Clinical Director for Older People at NHS England, has allowed early translation of the emerging findings in to practice – for example, the use of the Clinical Frailty Scale for risk stratification (following our evaluation of which tools are accurate and easy to complete), and the implementation of the Hospital Frailty Risk Score. We are also influencing similar considerations in Europe, North America and Australia. Our work on the HFRS won the RCP 2019 Excellence in Patient Care Awards The Lancet research award. 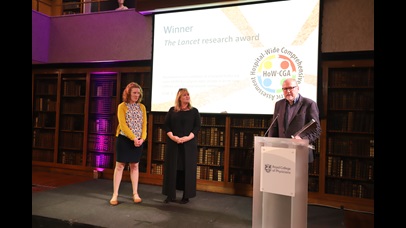 Work from both the Acute Frailty Network and the Silver Book are referenced in the NHS RightCare: Frailty Toolkit.

The Specialised Clinical Frailty Network (SCFN) started in 2018; in the first wave we are working with renal services focusing upon renal replacement therapy. The focus is upon person centred treatment decisions, using quality improvement, and underpinning research from the HoW-CGA study. In 2019 we will work with complex spinal surgery, neurosurgery and intensive care.

In 2018 we interviewed national and international leader in acute care for frail older people, which revealed:

Much of our work was cited in an NIHR ageing themed summary document in 2017 and influenced the 2018 NICE guidance on emergency care for adults.