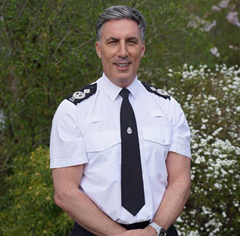 Rob Nixon was appointed as Temporary Chief Constable following the departure of Chief Constable Simon Cole. Rob has served with Leicestershire Police for 28 years, beginning his policing career there in 1993.

In 2000 he was appointed as Detective Inspector in charge of the City CID and was responsible for introducing the force approach to Offender Management.

In 2008 he was appointed as the Head of the force’s Community Safety Bureau, which was responsible for the development of Strategic partnerships, implementation of neighbourhood policing,  anti-social behaviour, offender management and preventing counter terrorism

His next role, from 2009 to 2014, was as Chief Superintendent for the Leicester City Basic Command Unit. He led local policing for the area and worked with communities during two large scale English Defence League and Unite Against Fascism demonstrations. He was instrumental in the force’s response to disorder during August 2012.

Throughout 2014 and 2015 he was head of business change and developed Blueprint2020 – a programme designed to decide how to make significant savings and take the force into a new era of policing.

He stayed in this role until April 2017, when he was appointed as the force’s Assistant Chief Constable. He has responsibility for local policing, crime and intelligence and public protection.

In February 2018 he was promoted to Deputy Chief constable and currently leads on professional standards, Business transformation, corporate planning , force performance and continuing as a specialist strategic firearms commander.

In December 2020, Rob was awarded the Queen’s Police Medal (QPM) as part of the Queen’s New Year’s Honours list.

Outside of policing, Rob lives in Leicestershire with his family. He is a keen pilot, skier and has developed his construction skills while renovating a derelict property.