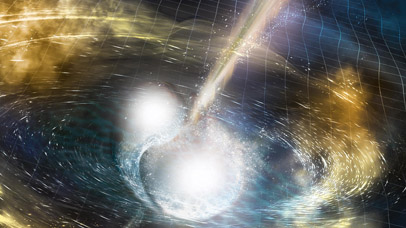 At Leicester we study explosive transients such as Gamma-Ray Bursts, the sources of gravitational waves and activity connected to galactic nuclei. This work is part of the new field of multi-messenger astrophysics, where we attempt to combine information from different messages from the universe (light, gravitational waves and neutrinos) to probe the origin and fundamental properties of explosive transient events.

Gamma-ray bursts (GRBs) are the most powerful explosive events in the Universe (after the Big Bang). Two classes are recognised: the so-called ‘long bursts’ occur when a massive star collapses at the end of its life, also resulting in a supernova. The ‘short bursts’, those shorter than around 2 seconds, are thought to be due to the merger of two neutrons stars (or a NS and a black hole) as their mutual orbit decays due to gravitational radiation. In both types of GRB a black hole or neutron star is born which accretes matter for a brief time and launches two, narrow, highly relativistic jets. If the jet is pointed close to our line of sight we see the bright prompt emission - the ‘burst'’ - but also see later ‘afterglow’ emission occurs as the jets give up their energy via interaction with the surrounding circumstellar and interstellar material. This afterglow emission fades gradually over periods ranging from hours to weeks and can be detected across the electromagnetic spectrum

In the cases of compact-object mergers, gravitational waves (GW) are also emitted and, unlike GRBs, can be seen at essentially any viewing angle. The study of GW emitters has recently become commonplace as ever-increasing numbers of sources are detected by the current generation of GW facilities. At Leicester we strive to characterise these events in a similar way to our study of GRBs, by undertaking coordinated searches for electromagnetic counterparts using many ground and space observatories observing across the entire electromagnetic spectrum. These observatories currently include Swift, GOTO, HESS, VLT, HST, Chandra and GMRT.  We are also co-investigators in the SVOM satellite, which will greatly enhance the search for high-energy transients, providing a powerful complement to Swift. It will be accompanied by the Einstein Probe X-ray survey satellite and the Cherenkov Telescope Array (CTA).  Leicester has access to all of these facilities, and by combining the data from them with those from gravitational wave and neutrino observations we both discover and characterise transients. In future the combination of enhanced survey capability simultaneously in the optical, X-ray, gamma-ray and very high-energy emission bands will bring many new discoveries some of which will also have gravitational-wave and neutrino counterparts.

We have a large, highly successful team of staff and students studying many types of transient providing a strong support system for PhD students. We also work with our colleagues in theoretical astrophysics to construct detailed models which predict the behaviour of transient sources.  Students also frequently join the observing facility teams, providing an opportunity to participate in the real-time operation of space and ground facilities. The ability to work with people who designed and built the observing facilities, developed the data processing software, construct theoretical models and interpret the results provides the ideal environment for rapid progress.