Formation and Evolution of Galaxies 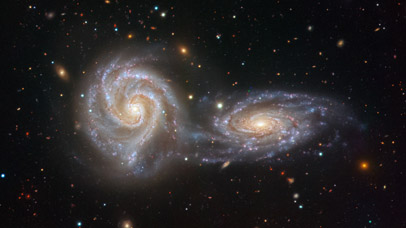 The traditional strength of the group in studying the evolution of active galaxies (AGNs) is all part of the wider quest to trace the history of elements, stars, galaxies,  extragalactic structure and blackholes through cosmic time, along with providing a context for the location and environments where transient signals originate.

Recent studies include Investigations of the way that the population of AGNs and their hosts evolve through the peak of cosmic activity, and discoveries about the host galaxies of transients revealed using multi-messengers, including some of the earliest galaxies known. There have been probes into the detailed nature of the stars and interstellar gas throughout some of the most luminous galaxies known, and in the more ordinary galaxies that are found in their environments, all providing insight into the astrophysics in galaxies in our evolving Universe.

Members of the group use space telescopes, and large ground-based telescopes in the ESO network in Chile, and elsewhere, to investigate cosmic evolution, at a wide range of wavelengths from the radio to gamma-rays, including ALMA, VLT, Hubble, and the forthcoming CTA. Group members are involved in the development of future facilities, including instrumentation for the James Webb Space Telescope, and the surveys that it will make.