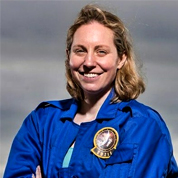 Dr Suzie Imber is an associate professor of Planetary Science and an alum of our University, having studied for her PhD (Named: Auroral and Ionospheric Flow Measurements of Magnetopause Reconnection during Intervals of Northward Interplanetary Magnetic Field) in the Department of Physics and Astronomy under the supervision of Professor Steve Milan.

Competing in BBC Two’s ‘Astronauts: Do You Have What It Takes?’ gave her the perfect opportunity of moving a step closer to realising her dream of becoming an astronaut. Suzie, who was crowned winner of the series, was one of 12 exceptional applicants asked to participate in the programme, from thousands who had applied. Famous astronaut and former Commander of the International Space Station, Chris Hadfield, former NASA medical researcher Dr Kevin Fong, and psychologist Dr Iya Whiteley, were among those who selected applicants.

Suzie said: “Taking part was an incredible experience for me, and enabled me to try things I would never have had a chance to do otherwise.

“The other candidates were amazing, and it was a pleasure to get to know them. We’re a tight knit bunch and we have stayed in touch. I’ve never met such an interesting, talented, well-rounded, intelligent group of people in my life!

“The programme has inspired me to apply for the next ESA astronaut selection process.”

She has held posts at NASA Goddard Space Flight Centre and the University of Michigan, and is currently involved in instrument design and operation for ESA’s next mission to Mercury. Suzie is also an elite rower and a highly-experienced mountaineer.

Interested in space from a young age, Suzie has spent her academic career looking at our solar system – her current research looks at terrestrial space weather and Mercury’s magnetosphere. Alongside this, she has also written computer code to identify and map unclimbed peaks in the Andes and Himalayas before setting off to climb them herself.