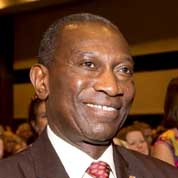 Rotary flags flew at half-staff last week in front of Rotary International World Headquarters and Rotary offices around the world. Friends and colleagues mourned President-elect Sam F. Owori, who died on 13 July from complications after surgery.

With an engaging smile and a calming voice, Sam put everyone he talked to at ease, says Hilda Tadria, a member of the Rotary Club of Gaba, Uganda, and a close friend of Sam and his wife, Norah.

“I call it the ‘Sam Smile,’” says Tadria. “It made him very approachable and easy to talk to. I think his smile is one of the things Rotary and his friends will miss most.”

Sam, who had been elected to serve as president of Rotary International in 2018-19, would have been the second African Rotary member, and the first Ugandan, to hold that office. He joined Rotary in 1978 and was a member of the Rotary Club of Kampala, Uganda.

“No matter the situation, Sam was always upbeat, always joking around and putting everyone else in a good mood,” says Tadria.

One of the admirable things about Sam, Tadria says, was his love and devotion to his wife. They met in primary school in Tororo, Uganda. Sam described Norah Owori as beautiful, well-educated, and full of character.

“He adored Norah and always put her first.” Tadria says. “They were best friends and partners for life. It was very sweet to see them together. They never left each other’s side.”

Sam was highly respected in Uganda, Tadria says, for his high integrity and consistent ethical standards. Those qualities, she says, are important in a Rotary president. “He was a man everyone could trust.”

She adds, “He preferred listening to speaking. It’s one reason he was so well-liked.”

The road to President-elect

Like many members, Sam was invited to Rotary by a persistent friend.

The more Sam saw of Rotary’s good work, the more enthusiastic he became. He is largely credited with the tremendous increase in clubs in Uganda: from nine in 1988, when he was district governor, to 89 today. His friends called his enthusiasm “the Owori madness” — to which he mildly replied, “If it is madness, I would be glad if more people would catch it.”

Sam described himself as “an incorrigible optimist” who chose to see the best side of everyone and the bright side of any  situation. Gentle in manner, unfailingly modest, and quick to smile, Sam is remembered as “Smiling Sam,” says RI President Ian Riseley.

Sam served Rotary in many capacities, including RI director, trustee of The Rotary Foundation, regional Rotary  Foundation coordinator, regional RI membership coordinator, and RI representative to the United Nations Environment  Program and UN-Habitat. He was a member or chair of several committees, including the International PolioPlus Committee, the Drug Abuse Prevention Task Force, and the Audit Committee.

John Smarge, who was selected by Sam to be his presidential aide, called Sam a “rock star” among Rotary members. “In just the two weeks he was President-elect, you could see how much he was loved,” Smarge says. “The Rotarians in Uganda view him as a national treasure.”

Smarge adds, “He spoke with quiet confidence and simple complexity.”

Sam brought an unyielding sense of right and wrong to his work as chief executive officer of the Institute of Corporate Governance of Uganda, to his previous work with the African Development Bank and other institutions, and to his work with Rotary.

Sam, who was one of 15 children, attributed his deep ethical sense to his upbringing, and particularly his father, who had been a school principal and then a county chief in Uganda. “He was a very strict disciplinarian,” Sam remembered, “and when he became chief, he ran that county like a big school — with a ruler. He insisted that everything was done the right way.”

Memorial contributions in honour of Sam can be directed to the Sam F. Owori Memorial to Polio.