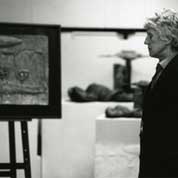 We have learned with deep regret of the death of acclaimed artist, sculptor and academic Ken Ford. Ken was awarded an Honorary Doctorate of Letters from the University in 2010 for his contribution to the artistic life of Leicestershire and the UK.

As recently reported in the Guardian, internationally-acclaimed artist and academic Ken Ford has sadly passed away.

Born and raised in Birstall, Leicestershire, Ken was inspired to become an artist by the difference he saw between the city streets where he lived and the countryside around his grandparents’ house near Stapleford.

He studied at Leicester College of Art, before going down to London to attend the Royal College of Art, where he graduated with First Class Honours. When he returned to Leicester, the College had become part of Leicester Polytechnic (now De Montfort University), where he was Head of Sculpture from 1967 to 1988.  Ken’s artwork has been widely exhibited throughout the UK and abroad.

Ken was awarded an Honorary Doctorate of Letters from the University of Leicester in 2010 for his contribution to the artistic life of Leicestershire and UK.