In memory of Sydney Simango 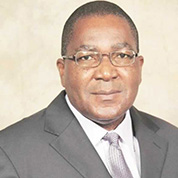 Born in Chipinge, Sydney was the second son of the late Andrew and Agnes Simango. He began his secondary education in Mutare; gifted in academic and scholarly pursuits from a tender age, Sydney was awarded the opportunity to complete his schooling studies in England, where he attended Redruth School, in Cornwall, in South West England.

With a keen interest in the laws of nature, natural science, and in particular earth science, he elected to pursue a Bachelor of Science degree in Geological Sciences, enrolling at the University of Aston, UK, and completed his studies in 1981. But the motherland called out to him, and with his heart as his guide, Sydney returned to Zimbabwe to begin his mining career at the Geological Survey Department, a department under the Ministry of Mines and Mining Development, as a Field Geologist.

It was in 1981, as well, that he met his one true love, Susan Simango, in Harare and they immediately fell in love and married the same year. Shortly after, they welcomed their firstborn child. But as a man of ambition and conquest, Sydney knew no bounds, choosing to further his education and this time returning to England and settling in the East Midlands to pursue his Masters, spending time between the cities of Birmingham and Leicester.

After being awarded a Masters of Science degree in Mineral Exploration and Mining Geology from the University of Leicester, Sydney returned to Zimbabwe to rejoin the Ministry of Mines and, following the birth of their second child, he was appointed to the senior role of Economic Geologist in 1988. Years later they welcomed two more daughters and he later completed both a Certificate in Management Development Programme and a Certificate in Total Quality Management Programme from UNISA.

Sydney’s career involved pivotal and pioneering roles in some of the country’s most prominent mining ventures including ZIMASCO, Ashanti Goldfields Zimbabwe, Zimbabwe Platinum Mines (ZIMPLATS), ZMDC and, what he would consider his most seminal work, TriMinZim. Sydney was a leader in and for the communities that he served both professionally and on compassionate grounds, contributing to a number of charities that advanced education and provided relief from poverty. Sydney initiated and ran social services organizations such as the Lions Club because he believed the greatest act for each one of us is to make a difference and inspire.

A charismatic and perceptive self-starter, Sydney enjoyed taking walks, fishing, watching soccer games, and spending, in his words, “quality time” with his family. Sydney was an avid traveler, reader, orator, writer, farmer, golf and tennis player, with a deep fondness for flora and fauna as well.

Sydney made lifelong friends wherever he went, from Shurugwi to England, Sakubva to Canada, and Harare to Australia, with each companion cherishing him as a dear friend, and he was proud to be considered thus. His accomplishments include being a longstanding professional member of the Geological Society of Zimbabwe; the Australian Institute of Mining and Metallurgy and the South African Institute of Mining. He was the principal of a geological and mining consultancy, a member of the Mining Affairs Board, and a registered natural scientist with the South African Council for National Scientific Professions.

It is in the eyes of many and, in particular, his wife and his children, that he has no equal. A man who loved deeply and affectionately, who listened dearly and gave advice, counsel, and comfort with no ask in return. A man whose presence was felt in every room he occupied, who made countless sacrifices and helped those in need with no ostentation or fanfare. He was loved by family and friends, numbering in the hundreds if not thousands, all of whom will deeply miss him - his kind eyes, his enveloping and comforting embrace, his larger-than-life personality, and his touching baritone voice.

In addition to his most dear and loving wife Susan Simango, Sydney is survived by his loving daughters Tafadzwa, Shamiso, and Mutsa; his son Bongai (Christy), countless cousins, extended family, and dear friends. Sydney may have left us physically but he remains with us, always in spirit with the abiding grace of the Lord above. They say what we do in life echoes in eternity and as we remember a great man, husband and father, his legacy will last for many tomorrows. Our love for you will last forever and will know no time or bounds.