The arrival of the shoreline detective 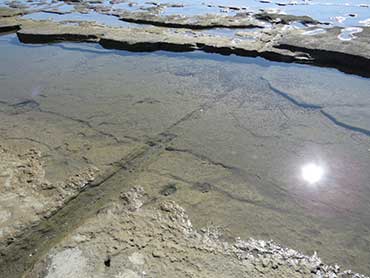 A coastal survey in October 2019 discovered these cut groves in the natural beachrock along the shore in front of the anicent city of Hierapytna, modern Ierapetra, in Eastern Crete, Greece.  The grooves were recorded during a survey of the coastal landscape of the ancient harbour area by Michael J Curtis and it is possible that they are  evidence of ancient shipbuilding along this part of the shoreline. In Roman times the sea level in this part of the island was 1.25m lower than it is today, making this a very different shoreline than is seen here today. Coastal archaeology is a developing discipline on Crete, combining both terrestrial and underwater archaeology, and this is the first time that this stretch of the coast has been studied in any great detail.  The survey was undertaken as part of a Greek led international collaborative project that is studying the ancient harbour of Hierapytna and is linked in with my doctoral research into the development of harbours on Crete from the 2nd century BCE to the 4th century CE.