Homeworking during the Pandemic 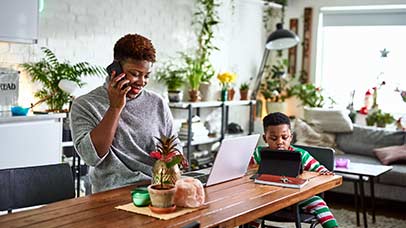 The pandemic has contributed to fluctuations in the well-being of employees working at home, but work-related factors that affect wellbeing when working on site – such as job autonomy, work-nonwork conflict and the ability to detach from work when at home – are still important.

Myself and Elizabeth Hurren at the University of Leicester have been conducting a study of university staff, academics and nonacademics, since the beginning of the pandemic. We have focused on homeworking on well-being. The research has included a four weekly diary study, in which the same questions were asked each week, that was conducted twice, in Spring and early Autumn 2020. 835 employees in two universities, one in the Midlands and one in the South of England completed each survey. We found no differences in average well-being between the two universities. Nor between those who had worked at home before the pandemic and those had not. This should not be interpreted to mean that homeworking had no effect but simply that having a history of homeworking made no difference to employees’ wellbeing.

Research on the effects of work on well-being has consistently shown that key characteristics of jobs, the level of autonomy and support from peers and managers and being able to disengage and recover from work after hours have benevolent effects on wellbeing, whilst high levels of demand, and work-nonwork conflict have malevolent effects. Past homeworking research has shown that it can increase the job autonomy people have, and particularly their ability to decide priorities and how to approach them, but a downside may be a blurring of the work-home boundary and feelings of loneliness and isolation from colleagues.

Homeworking during the pandemic is however distinctive. First, it was enforced and people may not have been prepared for it, have adequate IT equipment or be readily able to accomplish their normal tasks. Second, it was in the context of the virus so employees were afraid that they or their relatives might contract it. Third, government policies to mitigate it induced a recession which increased feelings of job insecurity.

An initial question we broached was: would these Covid-19 specific factors have an overpowering effect on wellbeing and hence override the standard work-related influences or even those associated with homeworking in normal times?

Using data from the dairy study we found that fluctuations in well-being were affected by changes in the course of the virus and by levels of job insecurity. In weeks where the deaths had increased from the previous week and where a person’s job insecurity had increased their wellbeing was lower. However, this was not at the expense of work-related factors as work -nonwork conflict and having to juggle between work and domestic/child care tasks also had similar negative effects; while job autonomy, supportive colleagues and being able to detach from work had positive effects on wellbeing. Factors that reflected the enforced and sudden nature of the homeworking such as not being able to work as normal, or inadequate equipment, and information blockages were insignificant. The salient effect of the home location was that it induced in some loneliness and this lowered their wellbeing. But this is not specific to the COVID-19 period.

The same factors explain the fluctuations in weekly well-being in the second period. With an important exception: the higher the job demands the lower the well-being.  Also COVID-19 deaths did not affect well-being in September.

The variation between people or average level over the weeks was in the first wave explained by fewer factors; job autonomy, psychological detachment, loneliness, and job insecurity. These remained significant in the second wave with the important exception of job autonomy.  This is important as it means the crucial factors are highly connected to homeworking and the pandemic.

Even more significant, the average level of well-being declined between Spring and early Autumn.  A decline in psychological detachment and increased loneliness account for this. Neither a decline in job security and child care responsibilities constraining work could compensate sufficiently for these effects.

The effects of Covid-19 had a direct effect in May but not in September, as the changing rate of deaths was related to weekly well-being in the first period. The enforced nature of the homeworking did not seem to be much of a factor, as home schooling, the lack of preparation for the homeworking, or ability only to do exercise had little effect.

Uncertainties surrounding the pandemic were also found to affect well-being. Those surveryed included the unpredictability of virus and efficacy of the policies to mitigate its effects and the clarity of the government’s and university’s policy. They went these to cover the predictability of future workloads, tasks, methods of working, where people would be working, and then support from the employer, and the direction of the economy. All these sources of uncertainty were contributing to the lowering of wellbeing. Moreover, they were affecting the ability of people to make decisions and to concentrate – cognitive stress.

The results highlight the downside of homeworking.  The location of work or the Covid-19 effects did not drive out the normal job -related influences on weekly changes in employees’ well-being.  But being in a home environment was critical for more routine levels.

Wellbeing was measured by three discrete indicators including a continuum from anxiety to contentment and one from depression to enthusiasm, Warwick–Edinburgh Mental Well-being Scale (WEMWBS).