The Materials Centre forms the nucleus of materials and physical chemistry research at the University of Leicester. Current academic projects and research activities focus on a range of materials focused themes, such as finishing processes, sustainability, recovery, mineralogy, engineering applications, forensics and the development and chemical analysis of novel ionic liquids and their applications within these fields. The team specialises in the following research themes:

Among their properties, Ionic Liquids are electrically conductive, have thermal stability, low combustibility and can act as solvents for many diverse compounds. Ionic liquids are known to have substantial applications in the fields of catalysis, metal deposition, extraction and in batteries. However, for a long time the cost of ionic liquids and their sensitivity to oxygen and moisture have limited their use. 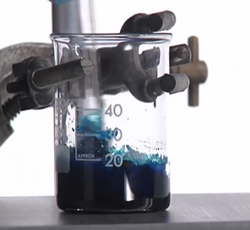 In response to this, the Materials group at the University of Leicester has developed a series of ionic liquids that have shown to be inert to air and water, while being of comparable cost to common organic solvents. The basis of the group’s exploration into novel ionic liquids is formed by the eutectic mixtures of quarternary ammonium salts and either metal salts or hydrogen bond donors to create what are known as Deep Eutectic Solvents.

As these fluids are environmentally benign, they have facilitated the research into the replacement of traditional inorganic and toxic acids in materials finishing processes.

Examples of processes in which these novel ionic liquids are being utilised include metal plating, electrochemical dissolution and deposition, and electropolishing. These Deep Eutectic Solvents have subsequently been used in thousands of worldwide scientific studies.

The images below are taken from a study of electrochemical polishing of stainless steels. They show a sample with both rough (native, unpolished) regions and the smoother electropolished regions. The liquid used for this process is a very benign, non-toxic liquid that now provides an alternative to the traditional mixture of strong toxic inorganic acids. 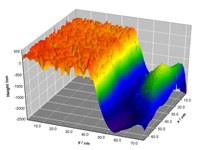 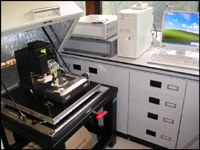 in dry air and in liquid. The latter provides a severe technological challenge but the Department has a new DI Nanoscope III instrument (pictured) which represents the state of the art in probe microscopy. This instrument also forms part of the University wide Advanced Microscopy Centre.

Recently we have applied the AFM to the study of thin film electroactive polymer interfaces.  These have many uses in the emerging technology of plastic electronic devices.

The group also studies the properties of electronically conducting polymer materials that change colour as a function of applied potential. These electrochromic materials have applications in display devices, smart mirrors and windows in controlled environments.

The diagram to the right shows a surface that defines the light absorption of a thin film of polymer as a function of time, 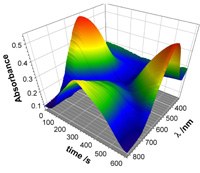 where time is also related to potential. At the starting time (t = 0) and the end time (t = 600 s) the polymer absorbs strongly in the red (ca 600 nm) so the material appears blue. In the middle of the surface, however, the polymer is only weakly absorbing and so appears almost colourless.

text-align: justify;">The Leicester group have pioneered the processing of minerals using DESs. We have found that minerals can be electrochemically dissolved using a paste

of minerals with DESs.  The group is involved in a number of projects investigating the recycling of rare elements through the SoS TeaSe project.

Mineral/DES paste can be painted onto an electrode to study the electrochemistry of the mineral.

With over 80% of organic carbon being present in the form of cellulose, lignin and starch it is unsurprising that numerous groups have attempted to use these as feedstock chemicals and materials. Extensive hydrogen bonding between carbohydrate polymer chains, however, makes the plasticisation of starch and the dissolution of cellulose difficult.

It has been shown that the incorporation of a simple quaternary ammonium salt can lead to a flexible plastic with mechanical properties similar to oil derived plastics. Compression moulding produces a transparent material with mechanical strength which is similar to some polyolefin plastics. It is shown that the material can be extruded and/or compression moulded and these processes improve further the mechanical strength of the samples. Most importantly it is shown that these plastics are recyclable and ultimately compostable.

Medium density fibreboard (MDF) is a ubiquitous product formed from wood flour and a formaldehyde-based resin. The use of the latter component causes some health and environmental concerns and its use is restricted.

It has been shown that thermoplastic starch can be used in place of the thermoset resin to produce materials of similar mechanical strength but with clear environmental benefits. All of the components are compostable and the resin being a thermoplastic allows the potential for remoulding and recycling which has clear environmental impact benefits.

Development of in situ techniques

During the deposition, dissolution and redox switching of electroactive films, it is necessary to monitor the amount, nature and structure of the interfacial components; this addresses the questions how much?, what? and where? When the electroactive material comprises multiple components and is perfused with electrolyte, the spatial distributions of the components are critical, as illustrated for the case of metal films (below).

Neutron reflectivity (in collaboration with researchers at the ISIS and Institut Laue Langevin large scale facilities) allows one to penetrate the electrode and solution to probe the composition and structure of “buried” interfaces. Analysis of the reflectivity response yields the spatial profiles of the components, illustrated (right) for the case of sequentially electrodepositing silver and copper layers on a gold electrode. The scattering length density (SLD), which is characteristic for each component, reveals inter-penetration of the metal layers and isotopic labelling reveals the extent of solvent incorporation. 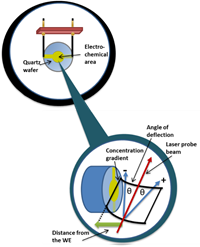 Complementary spatial profiles of the solution species are provided by probe beam deflection (PBD), in which a laser beam is deflected by concentration gradients that create a refractive index gradient in solution (somewhat like amirage effect). When combined with nanogravimetric acoustic wave measurements using the quartz crystal microbalance (QCM), one can resolve surface and solution population changes during electrochemical processes. This provides insight into polymerisation/deposition efficiency, dissolution and controlled release processes, ion (de-)insertion in energy storage materials, and solution speciation.

A single material seldom provides all the (electro)chemical, optical, electronic and physical properties required for practical devices. Composite materials offer the prospect of combining these characteristics. Polymers based on transition metal salen complexes can incorporate metal oxide particles to provide candidate electrochromic materials for display devices. The potential dependence of UV/visible spectra of  poly[Ni(salen)] films incorporating TiO2 nanoparticles illustrates this (see below). Analysis of the absorbance profiles provides insight into the contributions to the overall response of the different components of the composite.

Conducting polymers based on aromatic monomers (pyrrole, thiophene, aniline and derivatives) possess technologically useful electronic, optical and chemical characteristics. While electro-polymerisation and deposition of these materials as thin films onA graph demonstrating the growth dynamics of polypyrrole using neutron reflectivity. electrodes is simple, small variations in conditions can result in dramatic changes in properties. We have used neutron reflectivity to study the growth dynamics of such films, exemplified by polypyrrole (right). Multiple reflections from the inner and outer surfaces of the film result in interference, much as one sees optically for thin films on a liquid surface. Analysis of these fringes yields the film thickness. Coulometric assay of the charge passed (using Faraday’s law) yields the amount of polymer created. Comparison of these two data sets provides the fractions of the film that are polymer and solvent. This can be spatially resolved as a depth profile. Variations of these profiles with the deposition mode explain the variations in film characteristics. 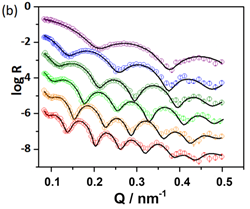 Fingerprints remain the primary means of identification of individuals, whether in criminal or civil (e.g. natural disaster) investigations. Criminal investigations generally involve latent(non-visible) marks: the challenge is to use chemical treatments to make the mark visible. For paper exhibits (documents, contracts, letters, ransom notes, paper currency) the physical developer (PD) method is typically employed. This involves the generation of colloidal silver particles via a redox reaction between Fe(II) and Ag(I) ions. The silver particles then selectively deposit on traces of fingermark residue (see SEM image, right). The presence of the silver is shown by spatially selective X-ray analysis in combination with scanning electron microscopy (SEM). One of the components of the traditional PD formulation, a surfactant that stabilises the silver particulates, has recently been shown to degrade in the environment to an endocrine disruptor and consequently environmentally outlawed. In collaboration with UK governmental scientists, we have determined the mechanism of operation of the classical method and thereby designed a new formulation with equivalent performance that presents no environmental hazard. 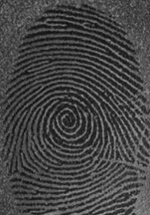 Many objects of forensic importance (firearms, bullets, knives, tools) are metallic. We have studied and optimised redox reactions between oxidising metal ions in solution and reactive metal surfaces that result in galvanic deposition of the elemental metal from solution. The image (left) shows the result of an iron surface on which is deposited a fingermark being exposed to a solution containing copper ions. The copper ions oxidised a small amount of exposed iron, resulting in the deposition of an equivalent amount of copper. In this case, the fingermark acts as a template, resulting in a negative image of the fingerprint. A large number of small features (“minutiae”) can be seen within the basic pattern: these provide sufficient detail for a fingerprint examiner to identify the individual leaving the mark. Application of this approach to a range of metals is being studied.

View our research projects
Back to top