Pneumonia is disease characterised by inflammation of the lungs, specifically the alveoli. The wide range of symptoms of pneumonia include coughing, breathing difficulties, fever, sweating and shivering. Pneumonia is particularly 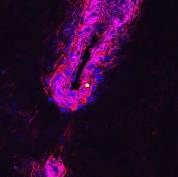 troublesome in children, the elderly and immunocompromised persons, where the risk of associated sepsis is far higher. The World Health Organisation (WHO) states that 16% of deaths in children under the age of 5 are due to pneumonia. Pneumonia is caused by a variety of organisms including bacteria, viruses and fungi.

Within LeMID, we are most interested in the bacteria Streptococcus pneumoniae, Staphylococcus aureus, Haemophilus influenzae, and Mycobacterium tuberculosis.

Research at Leicester demonstrated that exposure to black carbon altered the susceptibility of the bacterium to common antibiotics; this research was published in the journal Environmental Microbiology and covered widely in the press.

Streptococcus pneumoniae, commonly colonises the upper respiratory tract without symptoms. However, S. pneumoniae is a leading cause of community-acquired pneumonia and meningitis. Research at Leicester focuses on the interplay between host and microbial factors which lead to colonisation and disease. More recent work focusses on the effects of environmental factors on virulence, colonisation, and the efficacy of therapeutics.

Recently, Professor Oggioni’s group discovered that S. pneumoniae can subvert the host immune system, by replicating within macrophages in the spleen, hiding the bacteria from host immune effectors. Bacteria within cells reach a critical number and burst, releasing bacteria into the blood and causing sepsis. This research was published in the journal Nature Microbiology.

Pneumonia can also lead to sepsis. As part of the LeMID interdisciplinary network, related work on pneumonia-related sepsis includes that of Professor Timothy Coats, Department of Cardiovascular Sciences : Trial of early, Goal-Directed Resuscitation for Septic Shock

Dr Hasan Yesikaya is interested in S. penumoniae. His focus is on the link between microbial metabolism and virulence with particular respect to pneumococcal mechanisms for acquisition of host sugars and the regulation of sugar metabolism.

Here at the University of Leicester, several research groups have committed themselves to the study of this bacterium. Dr. Julie Morrissey and Professor Andrew’s groups collaborate to investigate the effects of air pollution on S. aureus virulence and colonisation using in vivo models of infection, and bacterial molecular genetics. Other research themes include the emergence of antibiotic resistance in response to environmental factors, and metal homeostasis regulation within Staphylococcus. Professor Oggioni’s group investigate specific antibiotic resistance mechanisms in Staphylococcus, these include target substitutions, efflux pumps, and mobile genetic elements. His most recent work on Staphylococci looks at biocide resistance mechanisms. A related article can be found on the NCBI website.

The University of Leicester’s Pneumopath website has some interesting information on pneumonia.

Professor Oggioni’s team use genomic tools to study microbial physiology in novel in vitro models such as biofilms and in vivo models. Using these techniques, specific phases within a microbe’s physiology are identified for the purpose of designing novel drug targets. More recently, this team has investigated the ability of pneumococci to persist and replicate within macrophages, using a variety of in vivo and ex vivo models of infection

Dr. Julie Morrissey's group focus on the effect of air pollution on Streptococcus pneumoniae behaviour and colonisation through mechanisms such as biofilm formation.

Dr Hasan Yesilkaya and his team investigate the effect of within host environmental interactions on bacterial behaviour. The host factors that impact on the bacteria include host enzymes and host metabolic products such as reactive oxygen species.