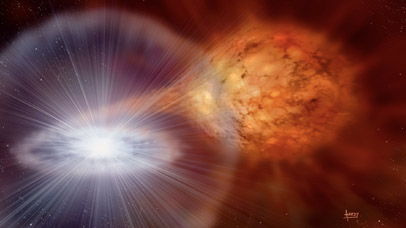 Collapsed stars such as white dwarfs, neutron stars and black holes, drain gas off close binary companion stars due to the strength of their gravitational field. This gas accelerates to high speeds as it falls, often in the form of a disk, reaching X-ray emitting temperatures (above a million degrees) close to the accreting star. The very first discovered X-ray source in the sky (after the Sun) was such a system, it was found in 1962. The University of Leicester has continued research in this area for many decades.

Most recently, the rapid-reaction Swift satellite (to which the University contributed the X-ray camera) has enabled new studies. We have focussed on the class of accreting white dwarfs which show huge and unpredictable outbursts, these are the Classical and Recurrent Novae. We have collected much better observations than was possible before and have discovered new aspects of their behaviour as a result. Novae erupt when the accreted gas on the white dwarf reaches the high pressure needed for the nuclear burning of hydrogen to helium. This causes gas to be ejected at thousands of kilometres per second, slamming into any slower moving gas and heating it to high X-ray temperatures (around a hundred million degrees). As the ejected gas expands, we can see through it to the hot white dwarf surface where nuclear burning continues. This has a lower temperature, more like a million degrees. We have found dramatic almost-periodic variations in the surface X-ray flux on timescales of 1-2 minutes. These might be due to the spin of the white dwarf or they might be due to oscillations of the energy output of the nuclear burning, the jury is still out on this; either way this will tell us something fundamental about the nature of novae. Also, we discovered huge random brightness variations in the X-ray flux from the surface; these seem likely to be due to clumps of dense ejected gas absorbing the flux as they pass through our line of sight, perhaps telling us how the clumpy remnants of old novae have formed.

The interval over which the surface X-ray flux is visible helps to measure the mass of the white dwarf. In recurrent novae (those with multiple outbursts known) a high mass is expected, and this is confirmed by our measurements. There is a nova in the neighbouring Andromeda galaxy that recurs every year, this unique and extraordinarily high repetition rate (measured by Swift) means that the white dwarf is extremely close to the maximum theoretical mass for these objects, and can be expected to explode as a type Ia supernova in about sixty thousand years time. This is a very exciting object, because this type of supernova is used to measure the acceleration of the expansion of the Universe, but we do not yet know what type of pre-existing system explodes to make a type Ia supernova.