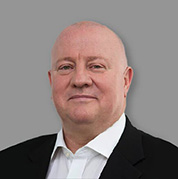 What have you gone on to do since graduating from the University of Leicester?

Following six formative years at the Department of Chemistry in Leicester, I started a post-doctorate position at the California Institute of Technology (Caltech), California. I returned to the UK in 1986 to join the Pharmaceutical company Roche, based in Welwyn Garden City. Although I had never mapped out what I wanted my future to look like, this marked the start of a wonderful 35 year career that provided me with the opportunity to live and work in five different countries (UK, Switzerland, Canada, Sweden, US) and in both pharmaceuticals and latterly diagnostics. By the time I retired from my role as CEO of the Molecular Solutions organisation in 2020, I was responsible for an organisation of over 4000 talented people with an annual turnover of $5 billion. Since retiring in 2020, I have joined several start-up companies as a Director or Advisor with a view to 'giving back to science' by sharing my 35 years of experience.

How has The University of Leicester helped to shape you over the years?

Over the years, I have often reflected on how blessed I was to have studied chemistry at The University of Leicester. Having led large organisations for many years there is no doubt in my mind that a background in chemistry was, and continues to be, a gateway to using science for the benefit of mankind. Even with the explosive pace of scientific advances over the last decade, a knowledge of molecular interactions continues to be a key to unlocking the potential of science.

The time I spent as a PhD student of Paul Jenkins turned out to be foundational for my career, something for which I am eternally grateful and should have told him more often. Beyond Paul's scientific mentorship, his values and humanity were a lifelong lighthouse. Years later, as I started to lead large teams of people, I realised that I had also (subliminally) benefitted from the sense of community created by the academic staff in the Organic Chemistry Department. Paul Jenkins, Paul Cullis, Bob Atkinson, Martin Harger, John Malpass and Stuart Trippet helped create a diverse, inclusive environment. This sense of community and safe harbour was something that I tried to emulate in my own personal leadership journey over the last 35+ years.

Do you have a favourite memory of the chemistry department or your tutor from your time at The University of Leicester?

Like many alumni, I have many memories that I could share, but the experience below is one I will never forget. For the non-chemists reading this, please forgive the chemistry detour, which provides context. As Paul Jenkins' first PhD student, I was given the opportunity to work on the synthesis of taxane (or at least the fundamental core tricyclic ring structure). The central inventive step was to build a framework with a tethered diene and dienophile that would create the tricyclic ring structure via an intramolecular Diels-Alder reaction. After over two years, I finally got to the point of having the Diels-Alder precursor. I vividly remember telling Paul on a Friday evening that, at long last, we were ready. He was as excited as I was and clearly expected that I would go straight back to the lab and run the pivotal reaction. When I told him I was going to the pub and would get around to it on Monday, a look of dismay appeared on his face. However, to his credit, he kept his calm and said OK! The truth was that I wanted some breathing space to prepare myself before trying this make or break reaction. So Sunday morning, I went into the lab and ran the experiment. Within a few hours I knew that the reaction had worked. I ran the NMR and then drove down to Paul's house, knocked on his door and when he opened it, I just held up the NMR in front of him. I'll never forget the relief and joy on his face, not to mention his temporary loss of words!

What advice and tips do you have for students and recent graduates who would like to enter a similar work role to you?

For those that want a career in science, there's no better foundation than training in chemistry. However, that alone is just a starting point. If you commit to lifelong learning, both scientifically and as a leader, you can achieve things you never imagined.