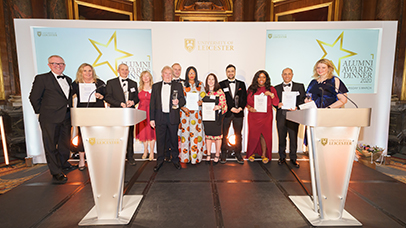 On Thursday 5 March 2020 we celebrated the incredible achievements of our Alumni at the second annual Alumni Awards Dinner, which was held at the magnificent Drapers’ Hall in London. We were joined by alumni and their guests, some of whom had travelled from as far as Los Angeles and Nigeria to be with us. The accomplishments of all of the finalists were truly inspiring and demonstrated the global impact that many Leicester graduates have made. Take a look at the winners below:

Faduma has been involved in numerous activities including working with our Future Students Office to arrange an outreach event during Black History Month for a local school, which was attended by 60 school pupils. She has also led a Digital Innovation Partnership project setting up discussion boards for students to share challenges and solutions, whilst also being a Peer Mentor for first year students.

Thomas has been passionately involved with the Social Impact Team, creating the SEED-funded ‘Rewild-UoL Project’ to improve biodiversity and ecological best practice at Leicester. He is also part of the Social Impact Ambassador Scheme, the SU’s Sustainability Representative, Leicester Delegate for the NUS Sustainability Summit, co-founder of the Impact Newsletter, and creator of the ‘Climate Curiosity Talks’ campus seminars.

Overcoming significant adversity whilst doing his BSc, Mesut secured a prestigious scholarship to do a PhD at the University of Bristol. At 31, he is now a very successful early career researcher at the University of Cambridge and has published over twenty papers in some of the most prestigious journals (including Nature Genetics, Nature, and Molecular Psychiatry) which have garnered more than 1,200 citations.

Fred arrived in the UK as a ten year-old refugee from the Holocaust unable to speak English, but became the youngest grammar school Headmaster in the country. He was a strong supporter and fundraiser for charitable causes including Age Concern, Hearts of England and the Holocaust Educational Trust. He was awarded an MBE for his contribution to education and charitable work in 2006. Fred sadly passed away last year.

Katherine is Senior Vice-President of Airbus in the UK. Katherine created the UK Women in Aviation and Aerospace Charter in 2018 and is President-Elect of the International Aviation Women’s Association. In 2019, she was awarded a CBE for services to aerospace and aviation. In November 2019 she was appointed Chair of the Western Gateway, the new economic powerhouse for the West of England and South Wales.

Paul has been actively involved with a number of projects at the University over the years. He is Partner and Chairman of an investment management company, as well as a barrister and accountant.

He has funded 3 separate ‘Lost Alumni Projects’ which aimed to engage with alumni who had lost contact with the University. The project was successful in reconnecting with around 2,000 alumni, who have so far collectively donated over £200,000 to priority appeals. He used his participation in the 5 week Endurance Rally from ‘Peking to Paris’ to raise £35,000 for Spontaneous Coronary Artery Dissection research. Most recently, Paul has funded a student crowdfunding platform and position at the University to enable student societies to secure additional funding for activities.

He has been an advocate of establishing the University of Leicester Endowment Fund to create permanent capital generating income to support the University’s work in the long term. He supported the initial research to establish an endowment model based on successful international practice, and hopes that a culture of alumni giving modest amounts on a regular basis for the endowment will build an endowment that can make a substantial contribution to the University.

David formed the University Folk Society and organised the first ever concert with Spencer Davis and fellow students, Roy Bailey and Michael Nicholson. David became the singer and principal songwriter of Strawbs in the 1960s, the first UK band signed to A&M in Hollywood with seven consecutive albums in the Billboard Top 200, selling over 3 million albums before the band split up in 1979.

David then moved into the radio industry and was appointed Programme Controller at Radio Tees, one of the first 19 commercial stations in the UK, before moving on to DevonAir Radio as the Managing Director. He was responsible for selling DevonAir Radio to Capital Radio and became a Senior Executive of the Capital Radio Group. David then went on to form his own marketing company specialising in the radio industry.

In 2000, David sold his radio interests to form Witchwood Media, Strawbs’ own label, which released CDs, DVDs and his song book and autobiography. David was nominated as a Fellow of the Royal Society of Arts. He continues to play music as part of Strawbs, having written over 300 songs during his career, many of which have been used for teaching purposes in schools. Following Strawbs’ 50th Anniversary celebration in the USA, he still tours the world.

The evening began with a drinks reception in the Court Dining Room, giving guests the opportunity to chat whilst viewing some of the fascinating materials on display from the University Archives and Special Collections. Guests were then treated to a delicious three-course meal in the stunning Livery Hall, before Professor Turi King, Master of Ceremonies for the evening, opened the awards ceremony. Alumni Association Committee Chair, Martin Cullen, and President and Vice-Chancellor, Professor Nishan Canagarajah, both provided welcoming remarks to the alumni community, before the awards winners were announced. The event finished with an after-dinner disco in the Drawing Room, giving everyone the opportunity to let their hair down and dance the night away!

Photos from the Alumni Awards Dinner can be found on our Facebook page.

Look out for information about the 2021 Centenary Alumni Awards Dinner later this year.